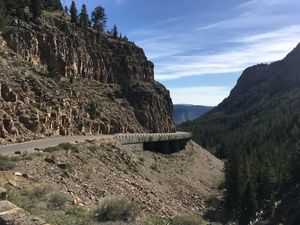 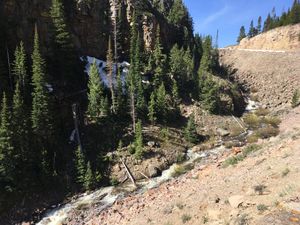 It’s hard to know what to say about Yellowstone – it’s a classic example of the inadequacy of language.  How many times can you say “spectacular” or “remarkable” before it loses its meaning, if it really had any to begin with.

Just one example:  I got on the road this morning heading towards Mammoth Hot Springs.  Within minutes I was at the turnoff for Gibbon Falls.  I hesitated momentarily because, well, you can’t stop everywhere, even though you want to and perhaps you should.  A second’s consideration, though, and it was obvious that this was worth pulling over for.  After all, I love waterfalls and the road clung to the very edge of the mountain with a deep gorge just a few feet away on the other side.

Endless eons of rushing water and several glaciers had carved out this gigantic crack in the earth.  Spectacular – dare I use that word?  The road itself was a wonder – just barely on the mountainside, with massive stone walls holding back the hillside and high concrete buttresses supporting the cantilevered roadway.  The hillside above had car-sized and house-sized boulders protruding from the sheer walls.  They’re not kidding when they say watch for fallen rocks.  I suspect there have been some nasty events here.

What kind of engineering and construction and human labor went into creating this marvel?  The first bridge here, I later learned, was built in 1885, using 1300 pounds of explosives and the dump trucks of the day – horses and wagons.   The road itself was a muddy track for the few brave travelers on horseback or horsecart, irregular and often impassable.  It was rebuilt in 1928, at which time about 700 cars a day traversed the road; now it’s six or seven thousand, so they built a new one, cut higher into the mountain.

As the canyon narrowed it become, if possible, even more dramatic.  The river roared, deep in a sheer-sided chasm, then tumbled over a precipice into the valley below in a wide, churning froth.  It then formed a broad, sinuous river meandering across a huge green meadow stretching to the far-distant mountains, deep-green with lodgepole pine.  It was, if I may say, spectacular.

The road followed the river upstream, the raging torrent on its way to the waterfall churning wide and full with spring snowmelt over a rocky riverbed.  Every turn would have been worth pulling over to study and wonder at, but who has that kind of time?

The turbulence diminished as I got upstream and reached its source, another vast, lush mountain meadow, rimmed by mountains and dense forest.  All those hillsides fed the meadow, feeding the river.  At various places across that vista, plumes of magma-heated steam rose and dissipated in the morning sun.

So those were just a few minutes out of days of experiences, each one more amazing than the one before.  Unbelievable landscapes within the vast caldera and snow-capped peaks beyond.  Geysers, fumeroles, mudpots, steam vents.  Unworldly, ethereal.  Deep, clear azure pools of boiling water, ribbons of bright orange and yellow created by tiny organisms that thrive in the boiling water, steaming vents and deep searing pools.

So, how many times and ways can you say “spectacular?”  Really, all I can do is post a lot of pictures, knowing that they only give a glimpse into the scope and scale of the reality.  Look in the PHOTO tab under Yellowstone.