It’s Sunday morning and I’m driving down Route 7 just a few feet from the Housatonic River.  As promised by AAA this is a fantastic road – windy, twisty and nicely banked.  It’s paralleled by steep hills on both sides.  Makes me wish I had my motorcycle again.  The trees haven’t leafed out yet so the ridgeline looks like the fringe on some enormous rolling fabric.

I pass a group of intrepid hikers, staunchly marching uphill in the rain.  I’m driving, so I find that it’s a very long hill.  I admire their spirit and tenacity, but I’m glad I’m in the car.  I continue driving and realize that it’s a very, very long hill and it’s raining more heavily as I get higher up.  It makes me very, very glad that I’m in the car.

I just crossed Cemetery Hill Road, the second road I’ve passed already in my travels with that name.  I suspect that every small town has a Cemetery Hill Road.  I’ve also passed a number of roads that start with “Old” – Old Sharon Road, Old Cornwell Road.  It makes me think that although the road I’m on is only two lanes and somewhat worn, Route 4 is the new road in local history, or at least it was in the 30’s.

Nope, changed my mind.  There has been, as my GPS keeps telling me, a recalculation.  It appears that I will have to pick my feet somewhere other than in Poughkeepsie.  I came upon the Taconic State Parkway, which I remember from my days of living in New York as being a particularly attractive motorway.  Another good motorcycle route.  It was constructed in the 30’s to the standards of those days which means the lanes are narrow and the curves are meant to be traversed at a slower speed then that at which traffic moves these days.  No matter.  It still a pleasant way to get from one place to another.  The two directions are separated by wide swales and thickets of mature trees.  Very pretty.

I’m on my way to Port Jervis, where friends from Staten Island now live.  Bill is a retired New York City firefighter who  became a lawyer.  Interstate 84 is one source of business for him – it’s wide and sweeps over the hills with relatively little traffic, tempting out-of-staters to push their speed to 80, 85  miles an hour.  However, it’s a locally known speed trap and the staties hang out in their cruisers, munching doughnuts, glancing at their radar guns when they hear the unmistakable whine of coinage on the hoof approaching.  Bill represents the offenders in court when they don’t want to drive all the way back to defend themselves, as most don’t.  It’s good to know these things and to attend to the speed limit. 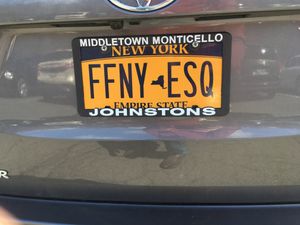