I know that I’m in the Midwest because I just crossed the Mississippi River and I saw my first Menards. 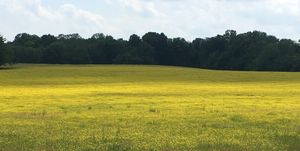 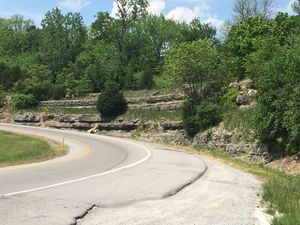 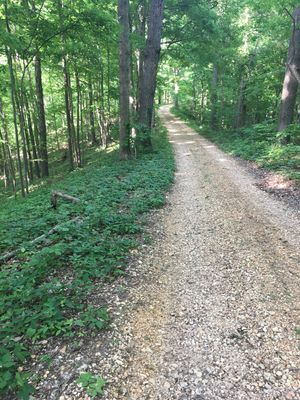 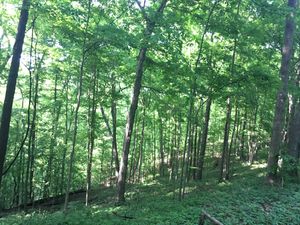 Last night was another example of hidden treasures of America.  I camped in the Trail of Tears State Forest in Illinois, where I was essentially the only person in a vast wilderness.  That’s not quite accurate – there were fewer than a dozen campsites, none close to any other, and I was already sitting around my campfire in the dusk, drinking wine, as a couple of late arrivals passed by on the narrow, winding gravel road.  They disappeared into the woods and I never heard a sound from them again.

In fact, the only sounds I heard at all were of birds and some crickets and some distant thunder.  Otherwise, a peaceful silence.  I moved my air mattress out of the car and into the tent and opened the screen covers.  During the night there were a couple of soothing, far-off train whistles.

The Weather Channel had suggested the possibility of some thunderstorms after midnight and indeed I was awakened by the roar of the wind in the treetops, the crackle of lightning and overlapping rumbles of thunder.  For all the sturm und drang there wasn’t a lot of rain – I didn’t even need to zip up the screen covers.  I stretched out in my little oasis, warm, secure and happy and just enjoyed the exciting show.

There were no mosquitoes and no bears, but there was one hazard that kept me from walking in the woods.  You know, of course, about Fort Knox with its 150 million ounces of gold as a bulwark against financial chaos.  You may be aware that there exists a Strategic Petroleum Reserve – 700 million barrels of crude oil stashed away in caves along the Gulf Cost as a safeguard against catastrophic shortage, natural disaster, trade conflict, war, or any number of other calamities.  You might know that there is a similar Federal Helium Program, a Highly Enriched Uranium Materials Facility and a Northeast Home Heating Oil reserve.  You probably don’t know about the Strategic National Stockpile because its size, locations, and exact contents are kept secret.  It holds the federal tools for dealing with Armageddon scenarios: anthrax vaccines, botulism antitoxins, and the like.

What I discovered was that the Trail of Tears State Forest is the location of the NPISR –
the National Poison Ivy Strategic Reserve. 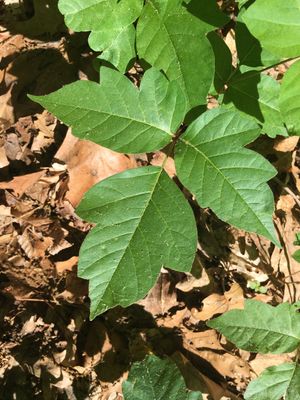 Should some misfortune cause the eradication of poison ivy everywhere else in the United States, this important national resource is available to repopulate rest of the country.  I felt patriotic, but didn’t go hiking.  Poison ivy covered the hillsides, the valleys, the rocks, the gorges.  It grew up the tall oak trees with vines as thick as my arm.  With this in mind, though, the campsites had been meticulously cleared of any trace of the pestilent plant so the only real risk was forgetting its presence, should nature call during the night. 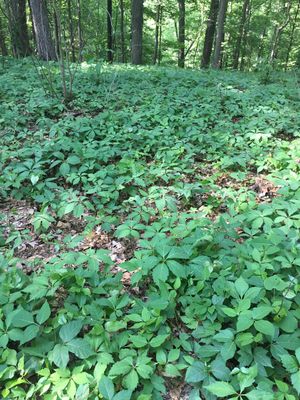 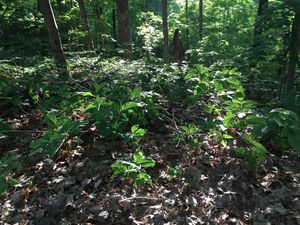 For the uninformed, here is a PSA, a public service announcement:

Poison ivy is easily recognized by its characteristic trifoliate arrangement of shiny dark green leaves – leaflets of three, let it be.  Contact with the plant or clothes or pets exposed to it can cause an itchy, blistering rash.  Immediate washing with soap and cold water or rubbing alcohol may prevent a reaction.  Never burn the plant as the smoke can cause serious, sometimes fatal lung inflammation.  There are no known industrial or medical uses of poison ivy, though it is said to produce satisfying result when applied to the socks and underwear of unfaithful paramours.  Don’t let this happen to you.

This message has been brought to you by the Department of Forestry and the National Association of Advice Columnists.