We had ended up in Hailey even though simply continuing up 93 would have been a more straightforward route.  Both had dotted lines on AAA maps, indicating scenic routes, but by cutting a day off of Arco we had some time to meander and we had heard that Hailey was an interesting town, which it proved to be.

Andrew and I have seen some pretty outstanding scenery, but northern Idaho really knocked our socks off – it’s not just potatoes here.  As I said about Yellowstone, it’s hard to put the visual experiences into words, so the best I can do is post some photos and caution that they hardly do justice to the reality.  Sheer cliffs crowd you against rushing rivers bordered only yards beyond by vertical walls that tower out of sight.  It’s amazing how many forms and configurations rock can present in  – they seem endless, each one as breathtaking as the one before.

We headed up north in the morning, following the Salmon river alongside the Bitterroot Mountains.  That turned our two-hour trip into a much longer one because every place demanded photographs and exploration.  I’ll post a few photos and let you insert your own favorite superlatives here.

After a while we crossed into Montana and turned into the Lost Trail Pass Ski area, hoping to drive up the mountain, but the road ended in the parking lot.  It wasn’t a total loss, though – I got a photo of the “Welcome to Montana” sign.  Approaching Missoula, we ate lunch and walked around the Lee Metcalf Wildlife Refuge, not letting a little thing like a road closing stop us.  A particularly brash ground squirrel searched around our picnic table looking for scraps, finally finding a bit of tomato.  Happy squirrel.

I had booked here for a couple of nights and it turned out to be the most organized place we stayed at – someone had a field day with a labeler – and perhaps the best equipped.  We got a chance to do laundry and it even had a small gym, which we were both enthusiastic about, though in the end we decided that it was mostly exciting to have, rather than to use.

We had been told that Missoula was a happening town.  Indeed it was.  We had a great Brazilian dinner at Five on Black and ate the next night at The Notorious P.I.G.  Pizza at Pie Hole a couple of times.  June 1st was the First Friday Gallery Night and we wandered in and out of a bunch of galleries showing interesting and cool art.

There was live outdoor music at one place – good band, too: The Dodgy Mountain Boys.  I was able to make a good contact at the local Democratic headquarters and offered to do voiceovers for local videos and campaign ads.  I went off and visited the Rocky Mountain Elk Foundation while Andrew rented a bike and went on several exhausting rides into the mountains – he was a happy man.

Pictures are here (on the PHOTOS tab) 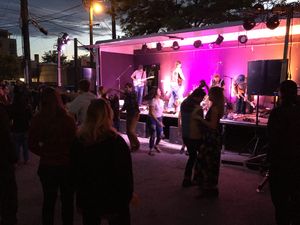